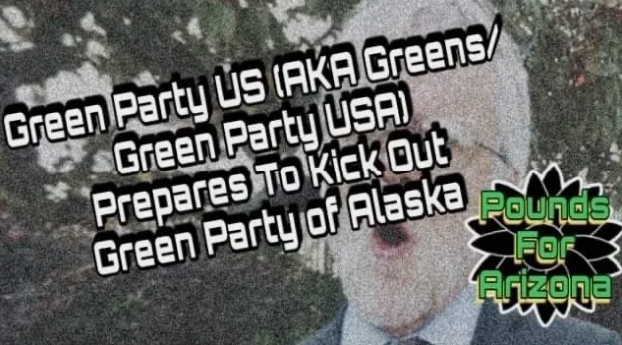 In late November of 2020, the ’Green Party US’ Accreditation Committee approved a proposal to de-accredit the Green Party of Alaska for nominating Jesse Ventura and Cynthia McKinney for President and Vice-President. The proposal was then forwarded to the ‘Green Party US‘ national committee for a vote. The De-Accreditation vote will take place between 01/04/2021 through 01/10/2021.

The North Carolina Green Party *ONLY* included Howard Hawkins as a candidate on their primary ballot; yet they had the nerve to accuse the Alaska GP of voter disenfranchisement when the Alaska party polled their primary voters with a *vast multitude* of candidates to choose from. It is most amusing that North Carolina’s Green Party can reject Green Party US‘ full roster of recognized candidates (Dario Hunter and David Rolde) for their primary process in favor of HAWKins, but the Alaskan Greens democratically practicing independence from ‘Green Party US’ is an offense worthy of expulsion. But, then again, we are speaking of a National Political Party that condoned a Coup d’état in the Colorado Green Party of democratically elected State Co-Chair Gary Swing, conducted by HAWKins’ campaign manager Andrea Merida. Ethical consistency is not at all something I can expect from their ilk. Soon, I hope that Robert Shields, Co-Chair of the Alaska Green Party will realize that he was wrong in his naïve belief that ‘Green Party US‘ can be saved and I was right in my advocacy to replace them with a new national Green Party. I do reserve gratitude for Robert reaching out to me when Jesse won his online primary poll so that I would help him draft-nominate The Governor but, I have no time to waste on diplomacy with chronic losers and intelligence state useful idiots.

The ‘Green Party US‘ is controlled by a small, centralized faction under the dominion of the HAWKins campaign. They are no longer representing the Green Party US’ founding values, they are now representative of the deceased organization ‘Greens/Green Party USA’ which rejected drafting Ralph Nader due to a stated rejection of electoral politics. These corrupt individuals unabashedly reject electoral politics as if that is an intelligent thing for a political party, “attempting” to obtain 5% of the vote, to do. These people are controlled opposition posing as a legitimate option for independent-minded and ecologically wise voters. ‘Green Party US‘ can’t be saved, it must be replaced, precisely as the organization ‘Greens/Green Party USA’  founded by HAWKins was before it. And I’ll fight ‘til my dying breath to replace it. They are a hindrance to progress and we’re going to get them out of the way.

“Neither left nor right but simply forward.“ – Petra Kelly (founding member of the German Green Party, the first Green Party to rise to prominence both nationally in Germany and worldwide.)