Howard Hawkins In Breach Of Contract With “Green Party US” Organization 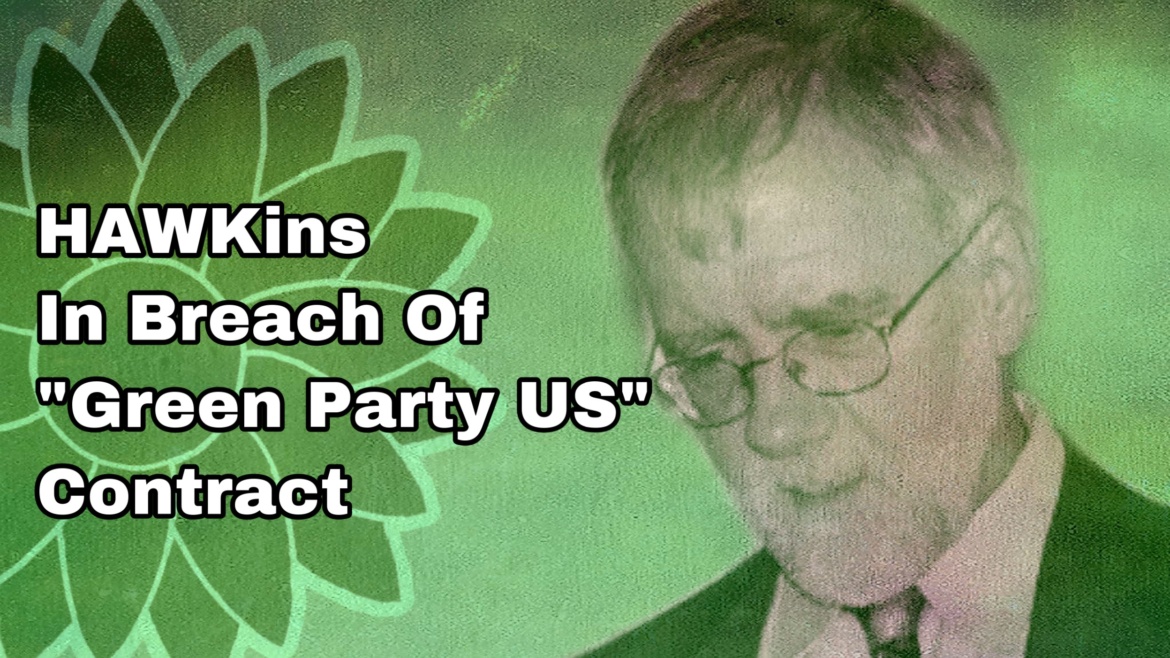 Greens across the country have inquired about when they should
anticipate receiving new contacts and donors from the 2020
Hawkins/Walker (H20) campaign. Presidential campaigns have,
historically, been an essential source of new supporters and Green Party
organizing depends on connecting supporters who came to know us through
our presidential ticket with local Green organizations and campaigns.

The signed agreement specified the H20 campaign would provide campaign
database exports of supporters and donors by no later than December 31,
2020.

As of this writing on February 14, 2021, over six weeks after that
agreed upon deadline, the H20 campaign has not fulfilled their
commitment to provide the data.

The campaign did not respond to emails in December asking for an
estimated time of arrival until 11:14pm ET on December 31st — New Year’s
Eve. At that time, Mérida Cuéllar stated technical difficulties were
preventing exports.

Weeks of delays followed, with Mérida Cuéllar and Hawkins failing to
provide a comprehensive new timeline for fulfilling their obligations.
Because the campaign cited time constraints on their end, the Green
Party offered to make qualified staff available to run the exports. The
campaign did not accept that offer.

On January 27, more than three weeks into their breach of agreed-upon
obligations, the H20 campaign provided the first batches of data to the
Green Party.

But there appeared to be no new contacts in that data. All of the
contacts appear to have Green Party Nationbuilder IDs, which indicates
none of these contacts originated from the H20 campaign.

In addition, this data is incomplete even based on the H20 campaign’s
definition. For example, the data set for New York State only
indicates 17 total donors. We know of New York state Greens who donated
to the campaign who are not represented on that list anywhere.

Mérida Cuéllar had indicated that “phone/text canvassing data” was still
being worked on, but that seems unlikely to cover missing donors and
email signups.

We asked the H20 campaign about these irregularities and for a timeline
on when we should expect the rest of their data. For over a week, the
Green Party did not receive a reply to these questions.

Our final, good-faith effort was to offer a meeting between Steering
Committee members and the H20 campaign, specifically Howie, Angela
Walker and Andrea. This call took place on Saturday, 2/6. In attendance
were Steering Committee members Hillary Kane, Gloria Mattera, Kristin
Combs, Tamar Yager, Margaret Elisabeth, Green Party Communications
Manager Michael O’Neil, and H20 personnel Howie Hawkins, Angela Walker
(H20) Andrea Mérida Cuéllar informed us within an hour of the scheduled
call that she was not planning to participate. * Acknowledgement that there is a significant amount of data still outstanding to fulfill the requirements of the signed Contact List Exchange Agreement — “all donor information at the time of export from the exploratory, party primary, general election and post-election phases of the H20 campaign team’s operations.” * Andrea will transfer all outstanding data within the next week (on or before Saturday, February 13). She will communicate the specific date of delivery to Michael O'Neil and the SC before then. * If Andrea decides she is unable to commit to transfer all outstanding data within the week, she will grant any login credentials necessary to retrieve the outstanding data to a representative of Green Party US, either Michael O'Neil or Margaret Elisabeth. Michael O'Neil and members of the SC have made multiple previous requests for a new delivery date and have not received one. We respectfully ask that you direct Andrea to communicate her intentions for delivery to Michael O'Neil and the SC by 6pm ET on Wednesday, February 10.

On February 10, Andrea transferred campaign contacts who signed online
volunteer forms and petitions to indicate support for issues and the
candidates. Early this morning, after the February 13 deadline, Andrea
appended information to some of the earlier batches of data to indicate
which contacts expressed explicit support for the Hawkins/Walker campaign.

The missing donors remain completely unaccounted for. The transfer of
data, even by Andrea’s parameters, remains incomplete.

The H20 campaign’s violation of these important, clearly-defined and
agreed-upon obligations have caused harm to this party. Every day that
has passed has diminished the chance we will be able to turn those
campaign supporters into long-term, Green Party supporters.

We are due to put out a direct mail piece to party donors and were given
no chance to turn those H20 supporters into party donors over the course
of January.

The delays from H20 mean delays for getting these contacts to you: state
parties, caucuses and committees.

Until the H20 campaign makes good on its obligations, it is not tenable
for the national party to promote or support personnel from their
remaining leadership team on official party platforms.

This has been a very distressing time for national party staff and
leaders who were committed to supporting our nominees. To experience
such a profound breach of trust in people we have known and worked with
for many years has been jarring.

We felt obligated to inform you of these events. We will continue to
make requests of the H20 campaign, specifically Howie Hawkins and
Campaign Manager Andrea Mérida Cuéllar, to fulfill their obligations
regarding this fundamental component of party organizing.

I must make several things completely clear, Michael O’Neil was both a paid official for the Hawkins campaign and “Green Party US” organization. This conflict of interest of O’Neil’s made itself apparent a great many times during the 2020 presidential primary as decisions he made as GPUS Communications Director were made to benefit his long time friend and rent-free landlord, Howard Hawkins. Any effort to separate him and Gloria Matera (Hawkins’ gubernatorial running mate) from the HAWKins campaign I will shoot down. They are so close to the campaign that when the issue of Andrea’s doxxing was brought up, they happily dismissed the issue as their paychecks from the Hawkins campaign were of too much importance to consider the concept of accountability. They signed their names onto the shitheap of the Hawkins campaign, as did the rest of the “Green Party US” organization when they ignored the roughly 65% of green primary voters who voted for someone who wasn’t Hawkins. Yet Hawkins, who lost so many green voters, was still rushed through as their nominee via first round voting, the will of *MOST* serious green-minded voters be damned.

Hawkins, while he happily places national party officials on his payroll, is pretty much out of money to prevent this issued statement by the “Green Party US” organization, well… the steering committee of the organization, the national committee is packed full of former campaign staff and loyalists, which is why I consider the statement moot. Hawkins is suffering major campaign debt and wants to run again in 2024, he ain’t giving you his donor list dipshits, it’s too small to begin with and he needs to fundraise to run again free of all or some debt. Hawkins feels entitled to special treatment, as he violated the party affiliation rule in article 10 with impunity. So a contract means nothing to him as he owns the national committee and they will refuse to lay a finger on him. It is most important to note he opposed the formation of the “Green Party US” organization as it was making his worthless anti-electoral politics “Greens/Green Party USA” organization obsolete. So of course he wouldn’t just part with donor lists, in contrast to Jesse Ventura who would have as Ventura only wanted to run for president one time. Hawkins seemingly wants to run for president forever and flop until his last breath.

Hawkins still has the money to maintain the loyalty of the national Co-Chairs so this act of defiance from the steering committee is moot. He will be the 2024 nominee of the “Green Party US” organization, this is not in dispute, the real question is how many greens are prepared to secede their state parties and join the “Independent-Green Party US” organization before 2024. I’m already working vigilantly with my allies to achieve this end and sincerely hope that my efforts aren’t in vain. My experience with 2020 has shaken my belief in the Green Party name, but I think to the words and wisdom of Petra Kelly and shout neither left, nor right, but simply forward! And then I know that the green name is worth saving even if the current established Green political organization has willingly fallen and needs to be replaced by a new national Green Party organization.