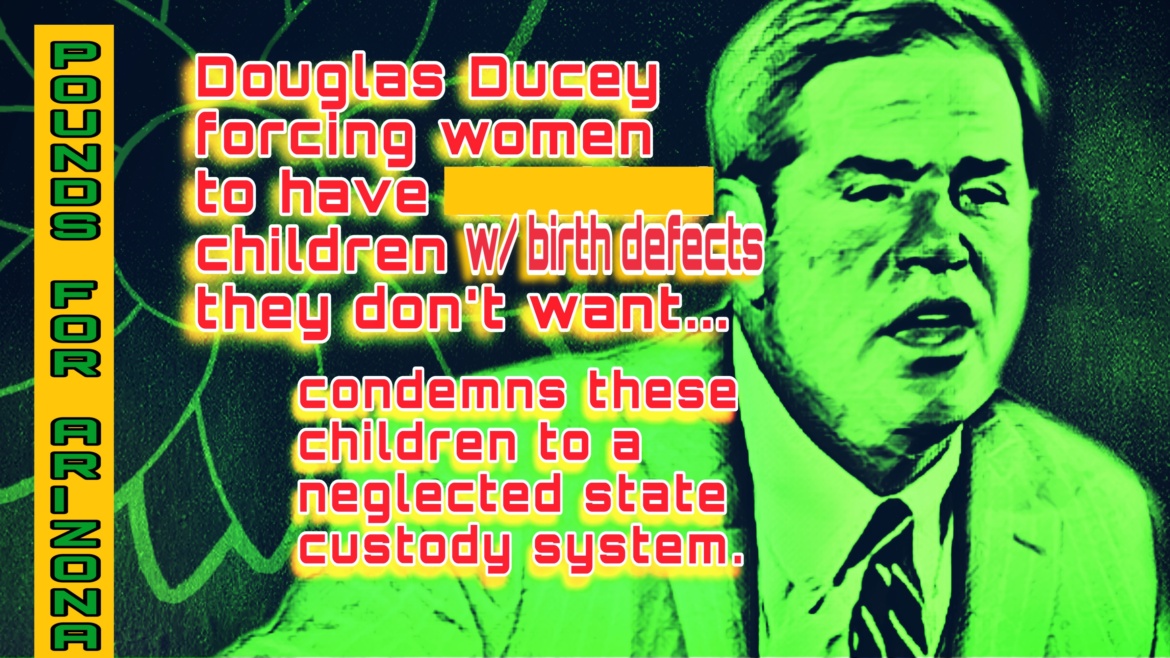 Recently, Governor Ducey signed Senate Bill 1457, which would make doctors performing abortion procedures on fetuses with genetic abnormalities (such as down syndrome) into felons. On top of the ban on abortions for genetic abnormalities, the bill bans postal delivery of abortion-inducing medication, allows the father or maternal grandparents of a fetus aborted due to a genetic issue to take legal action against the abortion patient, and bans the spending of any state money toward organizations that provide abortion procedures.

One reason I decided to run for governor, is that as a caregiver, I have seen firsthand the lack of quality and funding that goes into the homes unwanted children & adults occupy. While Arizona has laws in place, such as article 9 to protect these clients, it still isn’t enough. In state care, Arizonan group home occupants are subject to abuse & neglect, which could very well be the result of how little caregivers get paid in the first place, under-appreciation can breed recklessness. With this action Doug Ducey will overload the system with even more unwanted genetically defective children, all for political glory and the resurrection of his electoral viability on the evangelical right, without any thought to the caregivers whom deal with too much already for too little pay, the unborn children not expecting a ruined life in the system, and the women whose autonomy is being stripped. If we maintain the autonomy to not give our children a *life-saving* organ transplant if we don’t want to after their birth, why shouldn’t a pregnant woman maintain the autonomy to not bring an *entire life* into the world in the first place? Surely, it is crueler to deny the continuation of life to that which has actually known and lived life than to deny it to that which knows nothing at all, no?

Also, who’s to say that parents who choose abortion of a fetus with genetic abnormalities don’t want to keep what they have created? I can most definitely understand a parent who doesn’t intend to suffer a child through a life of severe genetically-induced struggle.

For shame, that Ducey would sign such polarizing legislation in the midst of a most important election audit, all to revive his dead image in the eyes of the Arizonan right. Because he can’t serve a third consecutive term, he is abusing his current office in order to win whichever office he can next, if he even can win anymore. Certainly, even those with pro-life views, should see that there are priorities to address to even stably accommodate the consequences of such attempts to legislate morality and regulate the behavior of women.

Though, in my own personal view, this kind of decision should be between a woman and her doctor.