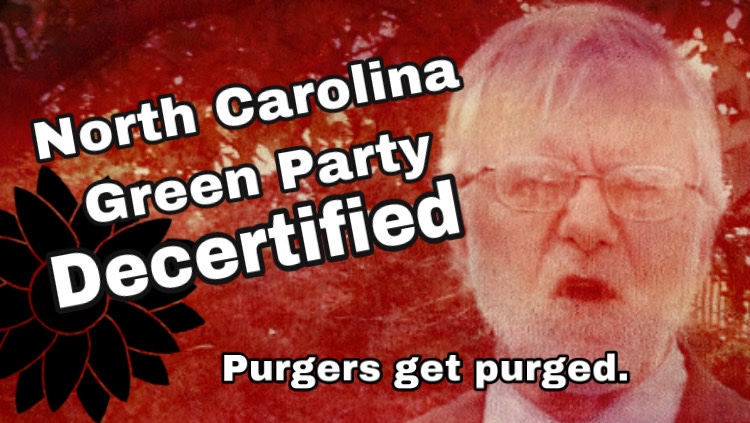 “Decertification of a political party happens automatically when a party fails to poll at least 2% of the entire state’s vote for governor or president in the latest general election….Neither the Green Party nor the Constitution Party met that criteria. In 2020, Green presidential candidate Howie Hawkins won 12,195 votes or 0.22% of the vote for president…” – Herald Sun reporting on the ballot access loss incurred by the Hawkins presidential campaign

I found it most ironic that, when the North Carolina Green Party denied access to their 2020 presidential primary ballot to every green presidential primary candidate but Howard Hawkins, primary ballot access was first being promised if a “ballot access plan” was presented to their state committee and if the plan compelled them. North Carolina’s Green Party state committee only deemed Hawkins’ ballot access plan worthy of accepting and then Hawkins proceeded to win the state facilitated presidential primary by about only 16% more than the ballot option “No Preference” given to green primary voters in North Carolina. I can only imagine what would happen if “No Preference” voters were given an actual candidate to back and how many Hawkins primary voters might have even flipped. But, fortunately, North Carolina’s Green Party will never again be given the chance to deny their primary voters choice, as their champion Howard has lost the party its state recognition, along with a great many more state parties.

Now, you might ponder what the North Carolina Green Party would be doing in light of conducting such a poor performance in the last election cycle. Their state party leader whom is also a Co-Chair of the ‘Green Party US’ organization, Tony Ndege, helped lead a move in tandem with the Maryland Green Party to force out the Green Party of Alaska from the “Green Party US” organization. All in the spirit of dividing an already divided federation of state green parties and further justifying my advocacy for the Green Secessionist cause.